When I teach the scales and key signatures part of theory, I always teach “The Circle Diagram” quite early on.

The instructions have taken me about half an hour to type, and the sheer wordiness may well put you off reading any more of this article, but if you haven’t come across a description of how to draw this diagram, persevere; I reckon it takes me about 90 seconds from start to finish to draw the whole thing, and it provides many of the answers needed in the Grade 5 theory exam.

The goal is for the students to be able to draw this diagram, accurately, from memory, in about 2 minutes flat.  As well as enabling the students to safely answer questions about keys and key signatures, I teach it as part of the overall exam technique.  If the students are prone to suffer from stress and anxiety when faced by written exams, the process of drawing a couple of well-known diagrams can have a calming effect before they brace themselves to tackle the questions for real.

The first part is to memorise the mnemonic “Father Charles Goes Down And Ends Battle”. This gives the order in which the sharps are added to the key signature.  In reverse, “Battle Ends And Down Goes Charles’ Father”, you get the order in which the flats arrive.  I like this mnemonic best because you only have to learn the one set of words!

It is important to draw the diagram in the same way each time, so that it becomes an automatic, unthinking process. Just remember, it takes a lot longer to explain the process than to do it!

Start with a clock: draw a circle, mark in the quarters, and then the hours in between.  At 12 o’clock, write a “C” on the outside (for C major), and “Am” (for A minor) on the inside.  These are the two keys, major and minor, which share the key signature of zero sharps or flats.

Next step: using “Father Charles” etc., put in the sharps around the outside of the circle from 1 o’clock through to 6 o’clock.  The last word, “Battle”, won’t be needed.  I insist on the sharps having their symbol, #, beside the letter, and being enclosed in a circle, so that they look like beads on a string.  This is to make sure that they don’t get mixed up with the actual keys associated with the key signature.

You are now in the position of being able to read off the correct key signature for every major scale using sharps!  That was easy!

Depending on the age and ability of the student, I might go on to the flat key signatures now, or leave it here for this lesson.

For the flats: working backwards from 11 o’clock to 6 o’clock, use “Battle Ends” etc to put the flats in, again, each with its symbol, each in a little circle of its own, and ending with “Charles“ at 6 o’clock.  It is going to get very messy at 6 o’clock, as this is where scales with 6 sharps and 6 flats collide.

Once again, there is a pattern for getting the actual keys into place.  At 11 o’clock, you write F (the First Flat key).  Weirdly, the B flat, that is the flat for F major, is the clue for the next scale which is B flat major at 10 o’clock, with B flat and E flat in its key signature.  Continuing with the pattern, this E flat is the clue for the scale that gets written in at 9 o’clock, i.e. E flat major.  Working through, you end up with G flat major vying for space with F # major at 6 o’clock.  Now is a good moment to introduce the word “enharmonic”, meaning “two notes with exactly the same pitch, but different letter names and accidentals”.

This is where I definitely stop, regardless of age or ability of the student!  You have arrived at the point where you can read off the key signature for any major scale with up to 6 flats or sharps.  Make sure that the student
always reads of the flats or sharps in the correct order; e.g. for A major, they should say “F, C, G sharps”, or even “Father, Charles, Goes sharps” rather than in some random order.

The final process, getting the minor scales into their places, is now quite simple.  If you find the “Am” that you wrote inside the circle at 12 o’clock right at the beginning, and find the A major scale at 3 o’clock, you will see that to get from A-major-on-the-outside to A-minor-on-the-inside, the A has “gone inside the circle and taken three steps backwards”. If you do this for each major scale in turn (be very careful at 6 o’clock to use either Gflat or Fsharp, but not both!) you have nearly finished; the last step is to work the enharmonic magic on the flat scales that have strayed across into the sharp side of the circle as A flat minor, D flat minor, and maybe G flat minor if you chose G flat rather than F sharp when you reached 6 o’clock. 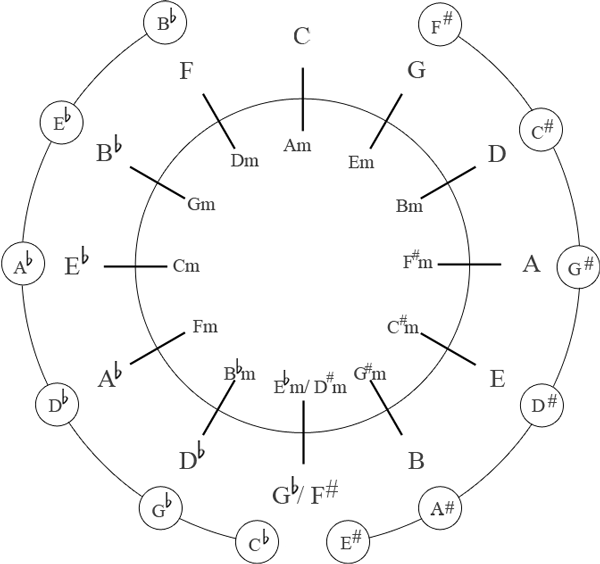