Issue 5: Dishing Out The Instruments

I reckon this is about the most complicated part of your average music lesson.  I learned how to manage this “the hard way”.  Actually, I am still learning how to do this – but it is getting easier as the years roll on by.

Early on in my teaching career, I was doing “soundscapes” with a large class of year 3 and 4 children.  I split them into four groups, laid out four piles of instruments, explained the task and set them to work.  Within seconds the hall was a seething mass of children rushing round, bashing and crashing, and bonging and dinging, and shouting and screaming, all at the same time.  There was nothing I could do.  I would get one of the groups sorted out, and as I set to work on another group, first lot would come back to the boil.  There seemed to be no way of making myself audible or visible in the midst of all this mayhem.

After about ten minutes, the headmaster (whose office was next to the hall), appeared and stood in one corner, without saying or doing anything.  A silence slowly spread, rather in the way a smell might spread from a drain, from his corner of the hall, as the children slowly realised that he was regarding the scene with an unreadable expression on his face.  The last few dings on a triangle were hastily stifled, and the children froze, watching to see what would happen next. The headmaster looked at the children, then at me, and then silently returned to his lair.  I was left struggling not to give way to wild and possibly hysterical laughter.  It felt as though I had been in the middle if a scene from a “Juniors at St Trinians” film.  With a huge effort I managed to compose myself and restart the lesson, and we continued more or less along the lines that I  had envisaged at the planning stage.  Next time, I gave a lot more thought to the logistics and instrument management part of the lesson!

The first thing to understand is, regardless of the age of the students, they will immediately start to do things, noisily, maybe even disastrously, to what ever instrument you are handing out.  Cymbals just NEED to be crashed, drums HAVE to be drummed, recorders are BEGGING to be blown.  Got the picture? 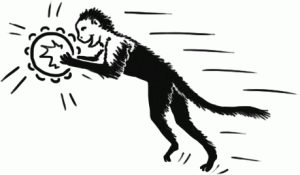 So, pre-emptive action is vital.  At the planning stage, think about:

1 – where the instruments are kept (in a cupboard, on a trolley, stacked in the corner of the room)

2 – how will you seat the children (at tables, on the floor in groups, or rows, or a circle)

3 – how will you hand out the instruments; will you call up the children in groups, ask certain
children to give them out, go round yourself?

4 – what will the children do while they wait? (Listen to some music, do a rhythm game).  What is going to be their reward for waiting so patiently? (for example, a favourite game or song at the end of the lesson)

Before you hand over a single instrument, give clear instructions to the children about expectations and consequences, and FOLLOW THEM THROUGH! Harden your heart, and unplug or remove any instrument that gets played, or touched, or even FINGERED while you are waiting!  You can always relent and give them back after a few minutes.

It is often a good idea to challenge them to hand out instruments without making a sound, and see who can be the quietest!

I watched a hugely experienced teacher of Samba take a very firm line with a year 5 and 6 class one week. The following week, after a reminder of how it was done, and importance of not playing the instruments while they were being handed out, the children were able to distribute the instruments by themselves.  Within a very few minutes they were all sitting in their groups, instruments laid out ready, without a single clink of agogo bell or any other instrumental sound.  What is more, the children looked extremely pleased at having achieved this feat!  This set the tone for a high standard of good behaviour for the rest of the lesson.

This entry was posted in Clarinets, Keyboards, Lessons that might have happened, Ocarina, Recorders, The organised teacher and tagged instruments, wider opportunities. Bookmark the permalink.