I used this activity last Summer to create a soundscape for the topic “The Seaside”. The children had just returned from a school trip to the beach… I have written it up in this issue in case you were planning some composition for next term, though whether it comes into the category of “A Cautionary Tale” or “An Inspirational Lesson” depends entirely upon yourself, and your class!

A Ripping Time at the Seaside

Thirty year-one and year-two children, and me, and a wary Teaching Assistant, were all sitting in a circle on the floor. In front of me was an over-flowing tray of scrap A4 paper.

We had been talking about the current class topic – the seaside – and singing a couple of sea-side songs. It was time for the next part of the lesson.

I took a piece of paper out of the tray, and slowly ripped it in half. Apart from the steady sound of paper fibres giving way as the tear slowly progressed from top to bottom, you could have heard a pin drop. I let the two pieces float to the floor and took another sheet.

The children were quivering with anticipation.

I grasped the second sheet along the short sides, slightly crumpling the edges into to get a better grip. Then I pulled it suddenly taught, so that it made loud snapping sounds. The children exclaimed out loud, and fell silent again as I took a third piece from the tray.

I held this one by a corner, and shook it from side to side, so that it fluttered and rustled. The children were still fascinated.

“Okay, let’s talk about these sounds”, I suggested. We discussed loud and soft sounds, long and short sounds. We talked about types of sound – rustling, crashing, gentle, scary.

“Do you want to have a go?” There was no doubt in their minds.

“You will have to be Very Sensible.” The children sat cross-legged, some crossed their arms, some even put a finger on their lips to prove how worthy they would be of a chance to rip up some paper.

I gave a few directions about the need to avoid paper cuts, and how they should listen carefully to the sounds they were making, and made sure that they were all very clear about what Very Sensible Behaviour would consist of.

The Teaching Assistant gave me a Speaking Look; something along the lines of “she’s flipped”, and “you’ll be sorry”, and “I thought I’d seen everything!” all in a single glance, and started handing a sheet of paper to each child. There were gasps of excitement when I announced that they were to be allowed SEVERAL sheets EACH. Their eyes were round and shiny with anticipation; they were almost shaking with the effort of waiting until everyone had a pile of paper in front of them.

There was noise. There was laughter. There was wanton, total destruction of page after page of scrap paper. There was almost (but not quite) pandemonium. The pieces of paper became smaller and smaller, until the class looked like one of those domed winter snow-storm scenes after it has been shaken, with snow swirling and whirling until finally the last flake settles to the ground. 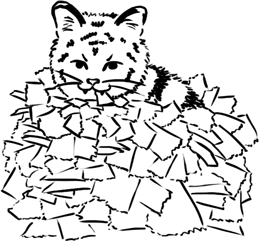 “Now then, children” peace had come at last. “This is a music lesson. How can we use these sounds in a musical way?”

You could see light dawning in the children’s eyes as suggestions for sandy sounds and thunder sounds and wave sounds and wind sounds came thick and fast.

I handed out more paper and we worked out a sequence of sound effects to make a sound picture. We started with some decent thunder claps, and saving the tearing-into-little-pieces sounds until the end.

I sorted out the microphone, and a further 30 pages of A4 were sacrificed in the name of art.

We sat back in the circle and listened to the recording of our efforts. The children spontaneously mimed the actions for creating the sounds as they heard them in the playback.

There was just time for one final treat before they went out to play. Back in their places in the circle, they gathered heaps of paper bits and scrumpled them into lumps and bumps. The TA and I went round the circle with some recycling baskets and the children were allowed to THROW the paper balls into the baskets; it took several circuits before most of the paper had made it into the basket.

However there were still small pieces of paper here and there all over carpet.

“Now then, if you want to go out to play, you have to give me a ticket before you can leave the room”, I instructed. They looked at me, puzzled.

There was a brief scurry as the children rushed round picking up all the last “tickets” and paid them into the recycling basket by the door.

Lesson over; time for a cup of tea.

This entry was posted in Composition, Lessons that have happened and tagged composition, timbre. Bookmark the permalink.