Start with their own names; then play a game where you choose a category eg animals, and children code up an animal, “say” it to the class, and the others write down and decode the word.

The chart below comes from wikipedia. I never knew about the specific rhythmic relationships between dots, dashes, spaces between letters within a word and spaces between words until I copied this chart into this art5icle. When I have done this activity with chidren, we have just “left a gap” between letters and announced when the next word started. I’ve only done this activity with letters, but I don’t see why it would not work if you added numbers as well. As step 1, but on instruments; note, with keyboards and some types of school percussion, you need to choose a suitable timbre in order to make a clear difference between LONG-DASH and SHORT-DOT sounds. This makes a useful opportunity to have a discussion about “attack” and “decay”, “fade-in” and “fade-out”.

This part of the process may take several sessions. To start with, each group choose a word, perhaps connected with the current topic, eg  “pyramid” if the topic is Egyptians.

They code up the word and play it several times until the rhythm is familiar. Encourage the groups to explore the effects of timbre, tempo, dynamics and pitch. They can all play together, take turns, or layer up the rhythm.

Once the rhythm of the word is secure, they can move on to creating accompanying drones or ostinato patterns. At this stage the group may well need paper and pencil to write some kind of graphic score. Remind them to explore  timbre, pitch, etc .

The final part of the process is to combine the various elements – the rhythmic motif (coded word) and accompaniments (drones, ostinato patterns)  into a composition with some kind of structure. One  way to create a structure is for the group to develop a story – for example (staying with the pyramids idea)

“it was night time. The only sounds were the sands shifting in the desert, and the muffled beat of the horses’ hooves as we rode towards the pyramids. The Great Pyramid loomed larger and larger, silhouetted menacingly against the starlit sky. A cloud scudded across the moon, plunging is all into near darkness; through the blackness we heard a low moan – “shh, what was that” we froze into total stillness. There it came again, louder and louder. With one accord we turned and fled back the way we came, galloping hard over the sand until we felt safe again.”

I would tend to demonstrate a possible story – like the one above, and get the children to discuss how they would use the ideas already explored to provide a “sound track”. Once the children are clear about what they are trying to achieve, then then can set to and create their own composition.

It is a good idea for everyone to stop and listen to the other groups from time to time, in order to share ideas and explore ways of improving and developing their compositions.

Recording and playing back the compositions will round off the whole project, giving everyone a chance to hear their own work and comment on it. 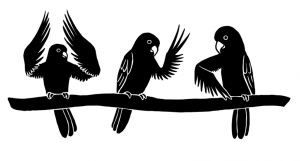