There is a little playground game song which goes like this; 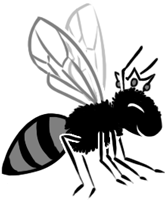 Stung a Pig up–on his snout, I say you’re out.

I have coloured-coded the words by pitch as follows; E, G, A. As you can see, this tune is even easier than last’s week’s game, as it only has three notes! If you use simple hand signs to indicate the relative pitches, the children will soon pick it up. If you want to use Kodaly hand signs, E  is Mi,  G is So, and A  is La.

Step 1 is to sing the song, keeping the pulse by tapping your knees, until it is very familiar. Sitting in a circle means that you can easily move to the game.

Step 3 is to play the game. Everyone stands up, and one person is selected to be the Bee in the middle. She (for it was a bright young girl this time) points to the children in the circle in time to the PULSE; this means that she should count off 16 children. So, as everyone sings, she points on the words in BOLD:

Stung a Pig up-on his Snout, I say you’re OUT

The child who is chosen on the word OUT becomes the new Bee, and the old Bee takes their place. The game begins again, starting from where it stopped. If you have a larger class, or are playing the game with year 3/4, try having more than one Bee spread out around the circle. The game will last a long time, until, sooner or later, a dispute will occur, because the Bee will have counted to the rhythm, moving along every syllable, instead of the pulse. This gives you an opportunity to go over the difference between pulse and rhythm.

With my year 1/2  class, I used this game as the starting point for a literacy discussion (syllables), numeracy work,(counting to 4, counting to 4 four times over, how much is 4 x 4, how many children get counted), internalising the pulse (count to 4 out loud, count to 4 in silence, repeat this pattern), instrumental work (play for 4, silence for 4) and call and response (one group plays 4 times, the other group plays 4 times), timbre, (choosing which instruments made up the groups)…

And I still had time to tell the first half of the story of the three little pigs in preparation for next week’s work. (Not to mention the warm up activity to help me learn all their names at the beginning of the lesson)

We ALL needed playtime at the end of the forty-five minutes!

This entry was posted in Songs, The organised teacher and tagged internalising the pulse, penta, pulse games, rhythm, singing game. Bookmark the permalink.