If you play a “single line” instrument, rather than a keyboard instrument, all the following is irrelevant, unless you want to see HOW HARD the scales are for keyboard exam candidates…

With one week to go before the piano exam, one of my students and I are having a tussle with G# minor scale, contrary motion.

I have to say it is a beast of a scale, but fear won’t help get it learned, neither will panic.

The purpose of this post is to demonstrate how what I call “Hard Thinking” works for learning and hard bit of music;

So, here is the brute in question: 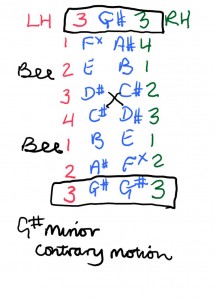 So, we took it slowly, starting with just the first two notes. G# – middle black note, middle fingers, and then G natural in the LH (OK, we all know it is F## but it looks like a G) in LH and A# in the right. Repeat thease two notes, with eyes boring holes in the keys…

Moving on another two notes; E (in LH this time) always coincides with an B (in the RH this time)

Get that properly stuck into the brain – verbalise what you are doing, CONCENTRATE.

Another B at the same time as another E.

Another “G natural” with another A#.

Now comes the really, really hard part; doing it by yourself, SLOWLY, dragging each step out of your memory before you play the notes, taking your time.

In the end, I had him playing the scale at a snail’s pace to start with, commanding him, willing him, encouraging him to THINK before every step. He desperately wanted to “take a run at it”; the pressure of having to be able to get it sorted within a week was over-ruling the learning process. However, one or two gruelling treks through the jungle soon cleared a path through the notes, and G# minor contrary motion began to emerge with more and more clarity.

This process of slow learning, and slow, determined, careful, dredging through the memory is a useful way of getting to grips with the tough passages. That same method helped us through the chaos of a few bars near the end of the Bach 3-part invention, which was one of those “I can play it perfectly well at home, so why can’t I play it now” moments of near despair, later in the lesson.

This entry was posted in Keyboards, Learning, Piano, Practising and tagged scales. Bookmark the permalink.