I tripped across this on the BBC news website: 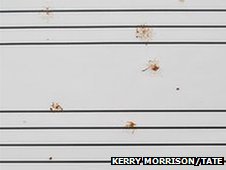 The positions of the droppings represented different musical notes

A piece of music that was composed by waiting for bird droppings to fall onto giant sheets of manuscript paper has received its premiere.”

You can hear a 30 second sound clip of the music too if you visit the site. The whole composition lasts 20 minutes; so one can’t really come to any conclusions from just the little clip!

Would this make an interesting idea for class composition? You could throw bean bags at a giant stave marked out on the floor and transcribe the end result.

You could issue smaller groups of children with some manuscript paper and let them flick or drop paint on it – or maybe that’s a bit too messy. Still, it wouldn’t be as messy as collecting bird poo.

This entry was posted in Composition, Listening Music and tagged Bird Music, Droppings. Bookmark the permalink.