Last week I ended up teaching a class ukulele lesson in an outdoor classroom in a corner of the playground.

No whiteboard, no computer, no backing tracks… that’s what music-making is all about!

This little song popped into my head, and provided the basis for the whole lesson; 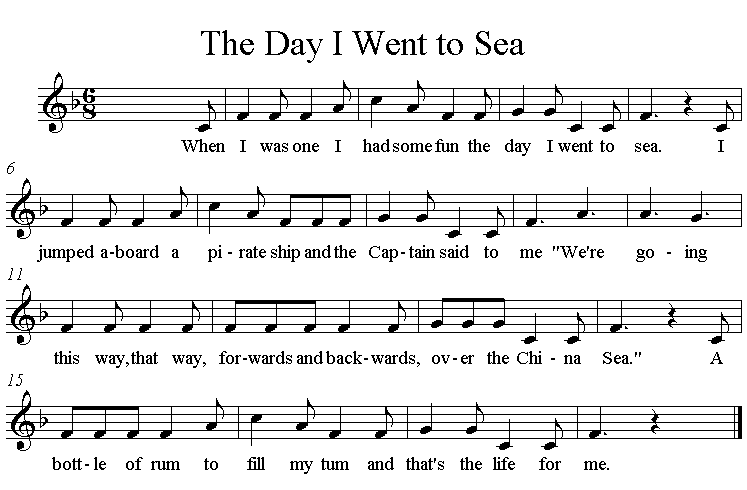 This is just one of many versions of the song: sometimes it is a sailing ship, and the destination can also vary (Irish Sea, bright blue sea are two others I have heard).

There are as many verses as you can manage rhymes for the numbers. Five is usually “learned to dive”, as being more nautical than anything to do with beehives. I usually go to Devon in verse seven. Ten seems a good place to grind to a halt.

I taught the song by just singing it; the children soon got the idea and joined in. Then we added the actions. It’s not a bad idea to limit the movement and excitement by singing sitting down on the floor.

one – hold up number of fingers; jump – jump; Captain – salute; this way – sway to left (or right); that way – sway to right (or left) – best to get this agreed in advance, and then enforce it, or the children WILL tip each other over); forwards – sway forwards; backwards – sway backwards (anyone who falls over backwards is OUT); over the Irish Sea – make wave movements with your hands in front of yourself; bottle of rum – hold imaginary bottle; to fill my tum – rub your tummy; that’s the life for me – thumbs up.

There. That’s a full body workout, and nine more verses to go!

Next: divide the children into small groups and allocate them each a number; challenge them to come up with their own verse. Then go back to groups 1, 2 and 3 and make sure that they are not being too lavatorial in their choice of rhyme.

Now to learn the chords: change the words to “an F, an F, an F, an F, a C, a C, an F”    These same words fit all four lines except for line three when I sing “We’re go-ing F and F and F and F and C and C and F”. The break in the pattern for “we’re go-ing”  gives everyone a chance to sort their fingers out if they’ve got themselves tangled up. You can divide the children into three groups: the F group, the C group, and the “switchers” who can play both chords. After another ten verses, quite a few children should have joined the “switchers”.

Now what – ten minutes left before the lesson ends… line up the children and walk around the playground singing and strumming for another ten verses? Why not!

This entry was posted in Songs, Ukulele. Bookmark the permalink.