On the whole I try and post about things that anyone can do without having bought expensive CDs and books. I’m wary of encouraging people to buy a particular resource, especially when it costs around £30.

However the ACBlack “Developing Music Skills” book and CD has been such a mainstay of my teaching ever since I bought it about 6 years ago that I have no reservations about heartily recommending it. (I have seen second-hand copies around for much less.) 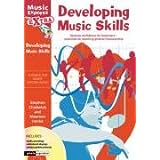 If you have the book, here are two games that I invented which have been inordinately successful over the years.

The “DeDa robot” game, suitable for Early Years and up to year 4

I have invented a little story to go with the game: “there is an invisible robot which hides in the room all the time when the music is playing, and then suddenly comes out and runs all over the place singing its little robot song. When you hear the song, you have to freeze, to avoid treading on the robot (obviously), and when the music plays, you get to move around the room”

Then I revert to robust teacher mode: “NO BUMPING NO RUNNING AND STAY ON YOUR FEET“.  I’m such a spoilsport. I encourage the children to move in time to the pulse, as much like a robot as possible. Use your own discretion about allowing them to go backwards…

As the music ends I seize the opportunity to call “Everybody Sit Down” which assists in regaining calm.

I also use the music and the game for tidying up, or leading the children out to play.

The “Cyborg” game, suitable for all Keystage 1 and 2

Use the track “Cyborg Chase”. You will need to do a bit of listening and preparation work before you play the game. Listen to the track together; you will hear that there are four sections, each four bars long. In the first section, beat 1 is clearly marked. In the second, beats 1 and 3 are marked. In the third section beats 1 2 3 and 4 are accented, and in the fourth section the half beats “1-and-2-and-3-and-4-and” are accented. The whole sequence is then repeated.

After some kind of preliminary work (sitting down for this is best) marking the patterns with hand or arm movements, you can transfer this to movement. This is the game; the children may only step on the accented beats. So, in the first section, they will move to their left foot (say); then their right; then their left, then their right foot. In the second section they will move on beats 1 and 3. In the third, march on beats 1 2 3 4. Finally (and make this ABSOLUTELY CRYSTAL CLEAR) the children run ON THE SPOT.(“Where do you run?” “On the spot!” “Sure?” “YES!”)

This is a good game as it stands, but to extend the game, challenge the children to end up in exactly the same place as they started. This is most effective if you start with everyone standing in a circle (or by their desk if you are in a classroom). It is harder than you think and may well take several goes for everyone to get the hang of it.

This game and track provides a useful was in to rhythm notation. Either use just crotchets, crotchet rests and quavers, or the whole array of semibreves, minims, crotchets and quavers. I print off the picture of the cyborgs doing their stuff from the CD rom, hand copies to the children, and get them to write in the rhythm notation. Works like a dream every time. 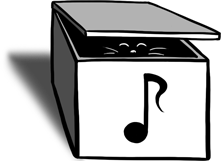