There are two things going on at the same time when you are looking at music; pitch and rhythm. Well, there’s a lot more than that, but I’m looking at just these two elements. Here’s a piece I am teaching at the moment, and it illustrates what I mean pretty well. 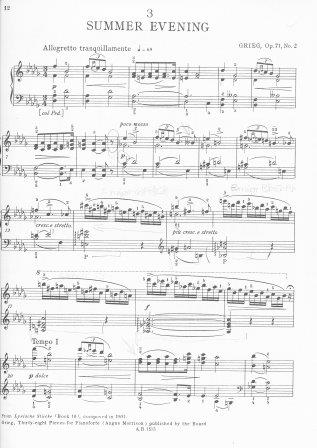 from the very first lesson, I start asking “is the next note higher or lower?”…… “Up or Down”?

It flabbergasts me that the children will constantly “go in the wrong direction” when learning a simple melody. I can understand it at the beginning, when young children are very uncertain over which finger is which, but surely the idea of “up the ladder” (rising inflection in my super-patient tone of voice) or “down the ladder” (downwards inflection in my still-very-patient tone of voice) is a question that has to be asked over and over again.

Still, I persist, and eventually they get the idea that as the notes go UP the ladder (stave) they go HIGHER, and vice versa. This works well, apart from for the few pupils who somehow never grasped which end of the piano is the high end and which is the low end. Then it is a case of back to basics. There’s no point in persisting until they have got that straight!

This rule of thumb (or fingers, haha) works very well, until, as demonstrated in the last two bars of the left hand, there is an unexpected change of clef, and the notes which appear to be going UP, are actually to play played LOWER. Heigh ho. This IS Grade 7, after all.

Anyway, the point is, that pitch notation has its roots in a kind of reality. You watch the “blobs” (note-heads) go up or down, and make your moves accordingly.

Not so with rhythm.

The distance between the “blobs” in a horizontal sense bear no relation to the rhythm. Just look at the first line. Each bar length is different but lasts exactly the same amount of time. In the first two bars, the left hand chords are the same, and should sound exactly the same in time and pitch, without being distorted by the fact that the right hand has extra notes to fit in the space. Or look at the fourth line. There are only three bars, but each of those, while taking up more than twice as much space as the first bar, takes the same time to playas the first three bars of the piece  (ignoring the effect of following the directions poco mosso and stretto) .

I keep a ruler by the piano (along with pencils, sharpeners, highlighter pens, stars, and the dreaded scissors) so that we can measure the bars and try and get the importance of READING the RHYHM NOTATION accurately well and truly understood. Otherwise everyone seems to just play everything as longer or shorter notes, which is not at all what I mean by rhythmical playing.

I used to think that these things were self-evident. I don’t remember anyone teaching them to me – but maybe they did, so long ago, that I have forgotten. I now make a point of formally discussing and exploring these aspects of note-reading, quite frequently, with my pupils, rather than take it for granted that what is obvious to me is obvious to them as well.

There is a constant requirement to understand things in different ways and to be observant and pay close attention to detail. you have to exercise close and timely control over the movement of hands and fingers, and react quickly and accurately, coordinating hands and eyes and ears. No wonder research shows up time and time again that playing instruments (and presumably reading music!) bring significant benefits to all the rest of the intellectual tasks that we have to scramble through every day.