One of the things I have learned to do over the years is to teach much less – I mean much less at a time, of course!

When you have a class of 25-35 children, you will find that you are covering every ability, in terms of physical, academic, listening, comprehension, and, of course, musical ability.

Take a typical class of seven-year-olds, learning keyboards in a Wider Opportunities programme. One may have already taken their Grade 2 in piano. Just about everything that you are planning to teach in the first term has already been covered in their piano lessons. A number of the children will be barely literate; either they are dyslexic, or they are still struggling to cope with the basics of the alphabet. Some will have excellent hand-eye coordination, others still will have very little idea of how many fingers are on each hand, and certainly no idea how to operate them independently.

I tend to go for a lot of rote learning, backed up with written material, and creative extension activities of the ones who are racing ahead (by week three there are usually several children giving Mr Grade 2 a run for his money. For example, this is what I did last week;

Sitting in a circle away from the keyboards (I always sit on the carpet or the floor with the children), teach a singing game with a really simple tune, such as Concentration.

Still sitting in the circle, hand out copies of the song written in simplified notation, eg

(The children are already familiar with rhythm notation, and know how to play note D on the keyboard with their Right Hand “pointy” finger).

Explain that notes above the line are fourth finger notes, F, and notes below the line are pointy finger Ds. (Dilly the Dog helped them learn that note last week and the week before). 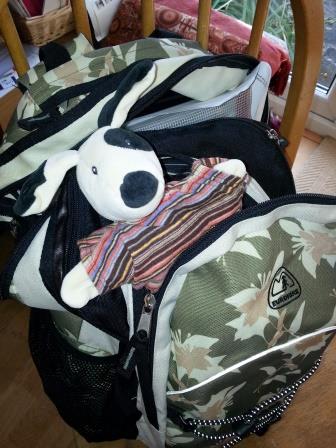 Play the song on the floor a couple of times while singing, and then demonstrate it to the class using a keyboard.

Now, let them loose on the keyboards. At this stage the class teacher and I circulate, helping the children who don’t have a clue, and encouraging the ones who are half-way there. The ones who complete this task in thirty seconds flat can be given extension activities; try different voices, set the style going and play in time, compose their own songs by drawing a new line, and writing in new rhythms and words.

Usually, after fifteen minutes of cacophony you will reach a point where you can call the class to order and all play and sing the song together at roughly the same speed and on mostly the same notes. Which, for week four of the keyboard programme, is a good result.

Next week we will do something similar with the song “Star Light, Star Bright” which they have already learned to sing. If all goes well, we shall add note G using “Bee, Bee, Bumble Bee“, a singing game we have played several times in previous weeks. I shall also add some serious revision of where to find note D (in between the TWO BLACK NOTES”, accompanied by Dilly the Dog. We shall probably play the “Leo the Lion” game, using Dilly instead of Leo. There’s another song using D, F and G (and of course there is always “It’s raining, it’s pouring, the old man is snoring” as well.

This entry was posted in Class Teaching, Composition, Keyboards, Lessons that have happened, Uncategorized and tagged mixed ability. Bookmark the permalink.