Issue 115: Samba for Everyone

I’ve yet to make my fortune as a samba workshop leader, but I have had some memorable moments this year.

In the summer holidays I ran a morning session at a “Stay-cation” holiday club at a local church. I guess the average age (excluding the helpers) of the people who came along was around 80, and I guess only a few had had the opportunity to play any kind of instrument since they left the rusting triangles and tarnished jingle bells behind at primary school.

To begin with, I thought that the session was going to be a disastrous flop. I was not surprised that many of the ladies decorously chose a smaller, safer instrument like a tambourine or a shaker at first. Later on, the competition for the Big Drums became quite fierce as people became more confident. Everyone had such a fierce expression on their face, no-one was smiling, and there was very little feed back to encourage me along. Then I realised that this was because everyone was fully engaged, working hard at the simple “listen and copy” games and so forth that I started the session with.

Once people had got used to the instruments and the sound, we were able to start layering up rhythms to play “Samba Reggae”, and now the concentration became intense!

It wasn’t until they were all going down to lunch and chattering together about how much they had enjoyed themselves that I knew for certain that we had been having fun!

It was a similar experience when I took the samba kit into a local day centre at a residential home for elderly people. Again, most of the people were well into their 70s and 80s. They also has various disabilities from strokes, or dementia, or other incapacitating conditions. It was a shorter session – about three-quarters of an hour. Again, I started with simple activities to begin with, and worked up towards layering some simple rhythms. And again, I was faced with very little feed back; adults of this age just haven’t had the kind of experience that today’s school children get of playing large instruments and playing them loudly. They were very cautious to begin with, and very apprehensive of “getting it wrong”.

standing drums (large plastic patio tubs mounted on some kind of feet work very well) as many people only have the use of one hand, making agogo bells and tamborims impossible to play. I took boomwhackers in; after the initial suspicions, people seemed to enjoy playing them, whacking them against furniture of the arms of their (wheel)chairs. 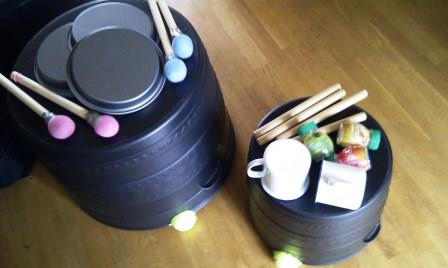 I offered both these sessions as a volunteer, as neither organisation has much in the way of spare funding. Like I said at the beginning, I’m not going to amass riches this way, at least, in monetary terms. However, I had a ball, and so did the participants, and I have been booked again for next year.

This entry was posted in Lessons that have happened, Samba and tagged samba workshops. Bookmark the permalink.