This class topic has been a gift for me. Now the entire year 3 keyboard class is able to read and play from notation with almost zero input from me! How?

We had been playing simple music for a term, building up from the simplified notation I explained here, but a lot of the children were still saying “I don’t GET it” (I loathe that phrase –  but that’s another story).

I gave the children a labelled picture of a keyboard (a bit neater than this one – I used a ruler!):

and a copy of this music: 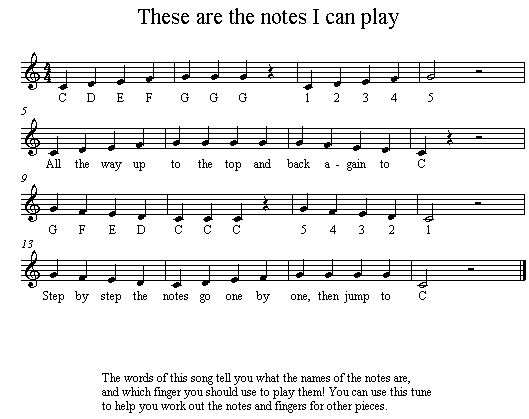 and a pencil. Their “mission” was to “decode” the music and play it on the keyboard. Once they had grasped how to go about this (namely, using the first line of the song to work out the letters or numbers for the rest of it, and use the diagram to relate the music to the keyboard) they were off. It was a matter of moments before the first players were picking out the tune on their keyboard.

Since then, they have used these sheets to “decode” and play other tunes, and also to compose their own music, first in “numbers” or “letters”, and then transcribe it into “code” – i.e. “real” music notation.