It has been a frustrating time for one of my piano students. We can look at a problem in a bar, work out what is causing it, sort it out, play it correctly half a dozen times in a row, and then as soon as we put that bar back into the piece, he plays the old error again. This has been going on for weeks – why?

One reason may be that when he is practising, he just mutters, corrects the problem, and then carries on. The error, the mutter (and emotional baggage) and correction are now firmly embedded into his playing – just what I wanted to avoid.

I copied a page of the music, and put a high-lighter mark on every note that was causing a problem.

We are still struggling with the first line: (“Dreamy” by Brian Bonsor) and it looked like this: 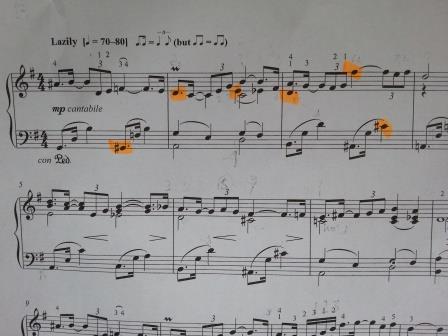 Not great. It becomes glaringly obvious that there is a habitual error in every bar, almost in every beat, in spite of all the careful, step-by-step work we had done over several weeks to try and correct them. The weird thing was, when I placed this high-lighted copy over the book, he could play the music perfectly. And even weirder, when I then removed the high-lighted copy he could still play it without a single mistake!

I was worried that he would become dependant on the highlighter, but somehow it has helped him to “place” the corrections into the context of the flow of the music so that he can then manage without the markings. We are trying this approach to sorting out the next line, which has the same problems of stumbling over something in almost every beat. I’ve given him the copy to take home and asked him to mark it up as he practises, and to bring it with him next week.

This entry was posted in Learning, Piano, Practising, Uncategorized and tagged highlighter. Bookmark the permalink.