I’ve put this song in The Jungle before, but here it is again with chords. I had a great time teaching three year 4 classes, and then a mixed year 3 and 4 class to sing and play this song earlier this week, and it worked like a charm. Totally brilliant. I love it when a plan comes together!

The year 4s are all aged 8 going on 18, and rebelling at the idea of singing “baby” songs – but unfortunately when it is your first lesson on an instrument it is bound to have to be a bit simple. It made for a fairly tough first lesson, probably not helped by the fact that they had just come in from kick-boxing. So I was bracing myself for another – shall we say – “lively” afternoon, when I suddenly remembered this song. It sounds so much more grown up than Row your boat. 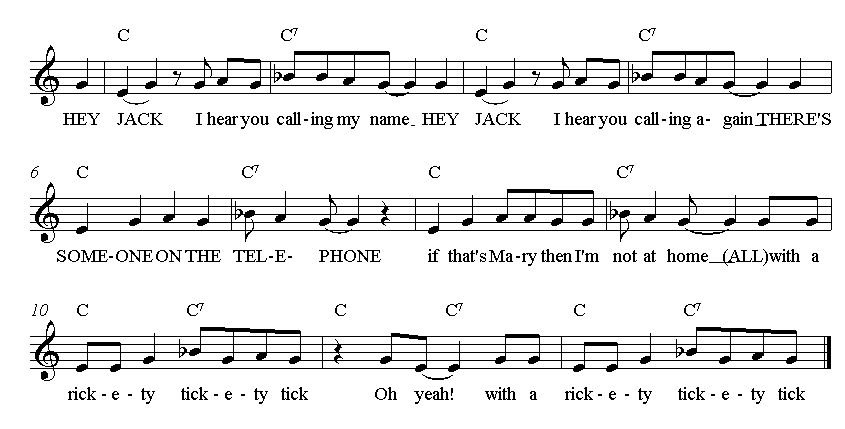 First off, I explained that the song was about two people having a conversation, and then taught it. I didn’t bother with the singing game, just did line by line “listen and copy” until the song was reasonably secure. Then we did some “watch and copy” movements in time to a drum track with a strong rhythmic beat (“Syncopate it” from “Music Express – Developing Skills” which is probably my most used resource).

On to the ukulele bit. Having sorted out how to hold and strum the ukuleles, I used the track again for strumming in time to a beat; switching between “once per bar” and “twice per bar”. NOTE – if you start the children off by having them put their thumb on their nose before you strum, there is a good chance that you will get most of  them strumming DOWNWARDS with their thumb instead of upwards with their whole hand!

I carefully explained the C chord, which we had done last week, and the C7 chord, and how to read the chord chart – this is worth a whole post on its own – and gave them the task of working in pairs to learn how to play the two chords. This gave me a chance to go round the class and sort out problems.

Then we were off. I wrote the chord sequence up on the board and played it to them;

and in slow motion we went through it together a couple of times. After the chord changes were beginning to become recognisable I speeded up slightly, and then began singing it. Whahay! They were soon all joining in, and I have to say it sounded Very Impressive. Smiles all around, and no (major) behaviour issues this week

This entry was posted in Class Teaching, Lessons that have happened, Ukulele. Bookmark the permalink.