Years ago, I had a fairly torrid time, teaching recorders to a group of year 2 children. I was inexperienced, easily coerced, and gave way with certain misgivings which were well-founded. It was grim and unrewarding and left me with a determination NEVER to teach recorders to Keystage 1 every again.

I’ve clearly not developed a stronger character or sense of self-preservation over the ensuing decade, as I spent last term teaching  descant recorder to two Year 2 classes, and I am now halfway through a term of teaching two Year 1 classes.

However, it’s been a much better experience all round. I was dreading Year 1, but, by keeping things very simple, we are at the stage where most of the class can read and play B and A with a certain amount of accuracy.

Secret weapon 1; a piece of tape stuck over the thumb hole of the recorder. Excellent squeak-reducing measure.

Secret weapon 2; simplified notation. We have only covered A and B so far, so I write out the music on large sheets with only one line on the stave. No time signatures, no treble clefs, no bar lines. They will all come later, if at all.

Secret weapon 3; colour coding. In this example, A is blue, B is black. 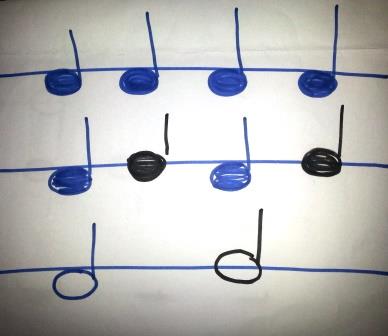 So far, so good. Five weeks to go.