Following on from the last post about the beanbag/percussion game,

I tried the same thing with the next class who were Year 3 and 3 (aged 7 and 8). I moved through the preliminary steps more swiftly, and added an extra element by grouping the children in threes, one with the bean-bag, one with the shaker, and one with a small hand drum, to tap when the bean bag landed on the floor. So, the game was, one child threw the beanbag up in the air (we had previously discussed what would make for “successful” throwing, and several children had obligingly offered “sensible behaviour”, “remembering that this is a music lesson and not play-time” – whoop whoop!), a second child played the shaker all the time that the bean bag was moving, and the third child tapped the drum when it landed.

I gave them a few minutes to take turns with the beanbag, shaker and drum, and then added another element.

Grouping the children in fours, one threw the beanbag, one played the shaker while the beanbag went up, another played a jingle stick or bells while it went down, and one tapped the drum when it landed. This is a bit harder than it sounds, at least to begin with. I gave the groups a chance to try this out, again taking turns, and then invited each group to demonstrate.

We spent some time talking about what made it work – watching each other, making sure everyone is ready, counting in or signalling when the thrower was about to throw, and so on.

Moving on a step, I explained that the bean bag thrower was acting as a conductor, showing the rest of the group when to play. If I took the ban bag away, how would everyone know when to play? What about the conductor making changes, like playing in a different order, or for different amounts of time, or more than one person at a time, or louder and softer?

After some time to experiment, we watched each group in turn – the results were surprisingly different and all quite sophisticated. Next time I shall show them some clips of a standard orchestra, with particular emphasis on the actions of the conductor. 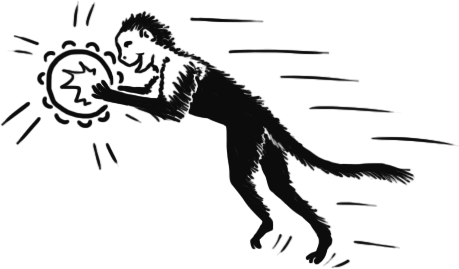 Footnote; I ran this lesson again with a different class of year 3 and 4 children at a different school the very next afternoon. This class were all dressed up for World Book Day, had spent the morning enjoying special session with a very lively story-teller, gone swimming, had lunch and playtime. I was expecting the class to be a little more lively, and a little less controlled – and this proved to be the case. In fact the whole session was altogether far more “hyperactive” than the previous one. I just did part of the lesson, and moved on to something calmer. You have been warned!

This entry was posted in Class Teaching, Lessons that have happened, Percussion and tagged conducting. Bookmark the permalink.