Egyptians is a “rather not” topic for me. However, I have been known to try and include something Egyptian. Here goes: here are some tried and tested ideas.

Joseph and the Technicolour Dream Coat is a source of songs, and you may be able to watch a video recording as well. Just watch out when Joseph is presented to Pharaoh. The version we were watching had Pharaoh surrounded by beautiful concubines apparently wearing nothing but strategically placed spangles. Later, I realized that they were wearing opaque flesh-coloured bodysuits with spangly bits on them, but the damage had been done. Memo to self: Always watch any video at home before using it in class, even if it says it is suitable.

You can compose pyramid-shaped music; for example sing this useful little warm up, using the scale of C, so the first list is the word “one” sung on a C, the second line is “one two one” sung to “C D C” etc 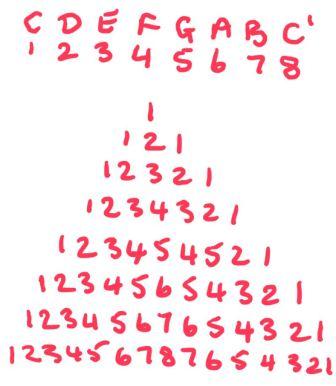 Finally, for a bit of composition, assemble all the instruments that might make sandy, desert sounds: shakers, rain sticks, finger cymbals, triangle are the first that come to mind. You could include your recorders players and make up a simple tune – playing slowly up and down the the pentatonic scale D E G A B will sound effective. Or else have a chime bar group playing something similar. Set the players in groups of similar instruments, and appoint a conductor. They create the music in real time by pointing to the groups in turn. Extend the activity by adding signals for louder, softer, faster, slower, stopping, starting, so the groups can be layered up.

Add an evaluation/assessment dimension by recording and listening to various versions, and discussing how to improve on the effect.

There you go! Have fun!

This entry was posted in Composition, Lessons that have happened, Songs, The organised teacher and tagged Egypt, pentatonic scales, pyramids. Bookmark the permalink.