I haven’t played this game for a while, but did it with a couple of classes a few weeks ago. Actually it was the same set of classes that I have just been talking about in the previous post:

In previous lessons, you make sure that the children are familiar with rhythm notation. I have only been using crotchet, crotchet rest, and pairs of quavers. From my flash-cards (downloaded from the Australian Kodaly website) I chose these four, and made sure that the children could say and clap them. We were using “Boom” for crotchet,, “sh” for the rest, and “whacker” for the pair of quavers. 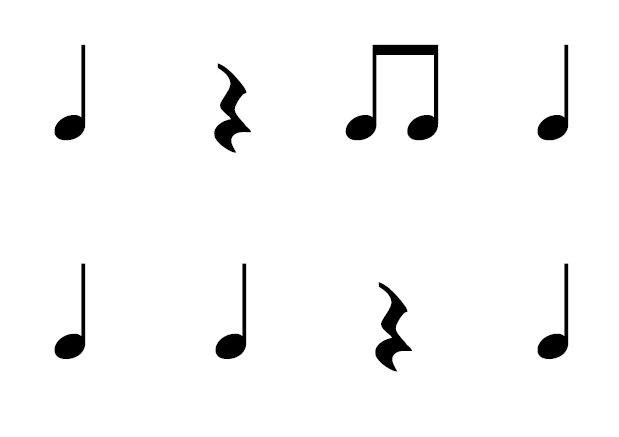 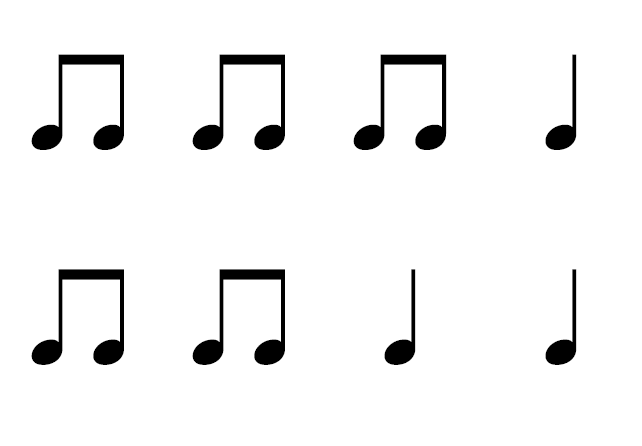 Once this was secure, I arranged the four flashcards in a row (choosing Sensible children to hold them) and we clapped through all four cards without a break – do a count in first to make sure everyone starts together.

At this point, a boy sitting near me turned round and stated “I can’t do this, because I can’t remember things”. As far as I knew, he didn’t have any major learning difficulties, so I merely said “Give it a go, and I’ll help you”. I thought it was so sad that at the age of eleven he already had a label “can’t remember things” which let him off even trying. He was reluctant, but at least made a bit of an effort.

Anyway, back to the trick. You repeat the process until all four card have gone. They should be able to do clap all four cards, from memory, without a mistake.

Normally, that’s the end of the activity. However, this time I extended it by starting a discussion about HOW they remembered the cards. Did they associate them with the person holding the card, or remember the actions, or the pictures, or the words, or the rhythms? What about the effect of the repetition? Did they have to think about it, or could they just do it? The point of this was to get them reflecting on the Process of how Remembering takes place. Too often, I find that people/children seem to think that just being in the place where teaching is happening is enough for learning to take place, ignoring the fact that some effort is required from them.

Well, that’s a big bee in my bonnet about teaching and learning, and it was good to hear the children reflecting on how they remembered the four cards.

And reflecting on this earlier set of lessons, and how well they went, goes a long way to helping feel better about the lessons with these children last Friday.

This entry was posted in Class Teaching, Lessons that have happened and tagged memory, rhythm cards. Bookmark the permalink.