I think I’ve got to step up my rate of posting if I am going to reach my target of 100 blog posts by the end of this year; this is week 6 or 7 (depending on how you count) and here is post number 10 – oh dear!

But it is half term and I’ll get a rush of posts up to catch up with myself.

I’ve taken over teaching a keyboard ensemble this year. For various reasons, including the range of ability (beginner to “can play anything by rote”) and age (five to fifteen) it is a bit of a tricky challenge. For the first couple of weeks I focussed on scales using tunes from my first post of this year, and that has worked very well. I was off sick the day I planned to teach the syncopated rhythm in Senwa Dedende, but I’ll save that for a session later on.

I’ve moved on to Left Hand Fully-Fingered chords, and handed out this sheet:

Although the chords are written in the treble clef, the idea is that the students play then using their left hand at the lower end of the keyboard.

As prep work, I showed them the very basics of how the three notes of chords are chosen using a xylophone I found abandoned in the back of the cupboard.

Listening carefully, we discovered that C, F and G were “cheerful” (major), D,E and A were “sad” (minor) and B sounded, well, broken – neither one nor the other.

I’ll leave teaching how to “adjust” tonality using “black” notes for another day.

The rest of the lesson was spent on learning how to play “white note chords” in different inversions, (click link for more on this) using the music sheet below. The reason why G and F major chords don’t follow the same rising pattern through the three chord shapes  (inversions) as the others is that the keyboards have the split-point, separating the accompaniment from the melody sections of the keyboard, at G-below-middle-C. 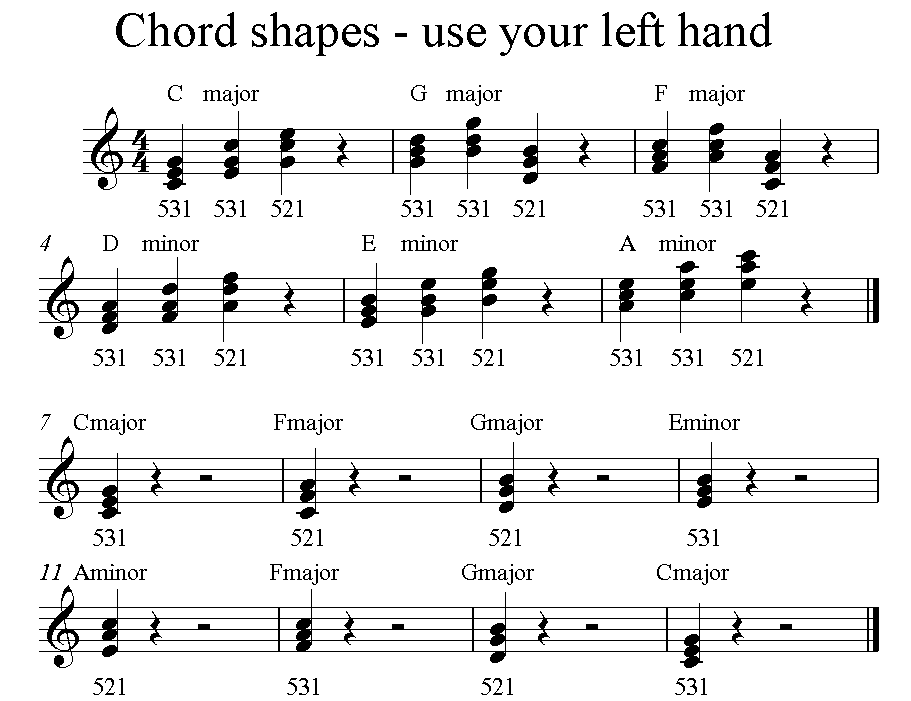 Once they had learned to read the chord and hand shapes, they tried playing them with different style settings.

The chord progression starting at bar 7 makes it crystal clear why using inversions (the different chord shapes) is so much easier than having to hop your left hand round the keyboard like a demented kangaroo, trying to play everything in root position.

If you play the very first C major chord using the lowest C on the keyboard, slithering your fingers through the various chord shapes is astonishingly simple.

This entry was posted in Keyboards and tagged chords. Bookmark the permalink.