Anyone who knows me is not surprised when strange things fall out of my handbag… I’ve currently got a stray ocarina, a samba whistle and some cheapo finger cymbals rattling around in the deep dark recesses of my bag. 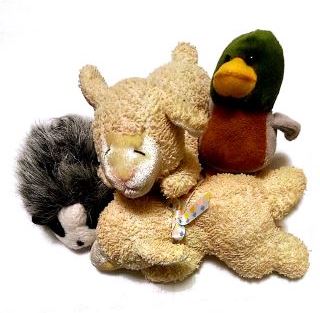 Originally there were just the two small stuffed lambs, but for end-of-term concerts on Tuesday (djembe) and Wednesday (samba) I will need four small animals. In the rehearsal I substituted my gloves, but I’ve bought a hedgehog and a duck since then, carefully chosen for their “pass-ability” in the stone passing game.

The problem is that the children will be arranged in four groups, rather than in a long line or, even better, a circle. So we have practiced sending the animals back and forth along each separate group. When the animal reaches the end of the line, it just gets passed back again, until the game ends.

The djembe children will be sitting on four separate PE benches, and will gently pass the animals from one djembe to the next. The samba children will have a trickier task, as they will be standing up (“instruments on the floor, everyone, and keep your feet still so you don’t tread on them, please”. They will have to concentrate on passing the animals carefully so that they don’t drop them.

This entry was posted in Class Teaching, Lessons that have happened, Songs and tagged bag. Bookmark the permalink.