Paul Harris has a list of publications as long as my arm. Here is my new “toy”

Now, don’t laugh; I was ordering a couple of books of music, and needed to add a little something so that I didn’t have to pay delivery charges. This caught my eye, and at £4.99 just neatly tipped my order into “free delivery”. However, I hadn’t read the “small print” properly, so when it arrived I was a bit disconcerted to find that it was a pack of cards, not a book!

The idea is that you pick a card and do what it says. So, I tested this out on my next piano pupil… she was very dubious, but pulled this one out of the pack: 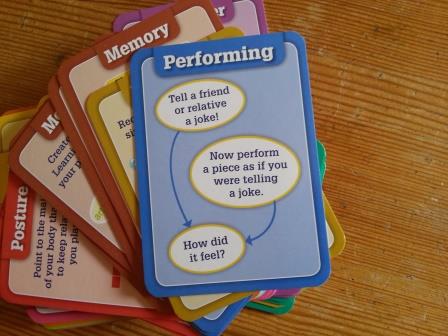 That had her flummoxed. So I told her my favourite “Knock Knock” joke;

Her “Who’s there?” pause “What? I don’t get it” (her mother, sitting on the other side of the room did!)

So, once we had discovered what the joke was, we had to fathom out how to play her piece like the Knock-knock joke. In the end we decided that you could start to play the opening phrase, and suddenly stop – because that’s what happens with this joke. Now for another joke…

To my delight, she came up with an old nonsense rhyme which I’ve always enjoyed;

“At the crack of dawn, in the middle of the night, two dead men got up to fight,

Back to back, they faced each other, drew their swords and shot each other.”

She knew a different second verse to me, better than mine, and I will have to try and find it. Something about a lame donkey kicking someone.

So, now how to play this verse? She played a phrase from her piece, and I responded with something completely silly, and we carried on in that vein for a while, before swapping over – I played something sensible and she played something random. I’d call that a successful start to a lesson.

I think what I might do in future lessons is copy the text of the card into the student’s practice book so they can go on trying the activity at home. What I like is that I am having a chance to think, play, listen in a new way at the same time as the student. I think I’ll pull out a card for me the next time I start my harpsichord practice.

This entry was posted in Improvisation, Learning, Lessons that have happened, Piano, Practising and tagged Improvisation, musicianship, playing around. Bookmark the permalink.