Who would have thought that handbells could be so scary?

It all looks so easy…  here’s a “flashmob” in Hawaii which you can listen to on youtube: (it’s only three minutes long)

I love that resonant sound.

I used to ring in a Handbell Consort; we took it fairly seriously, but not to the extent of wearing white cotton gloves. OUr repertoire was extensive and impressive – “Star Wars”, “Light Cavalry Overture”, and even Scott Joplin Rags.

Today we had an ad-hoc all-age handbell session as one of the activities in church this morning. I made a very, very simple chord-based accompaniment to two of the hymns/songs that we were gong to sing later on. The grown-ups and the sensible small child soon got the hang of which bell to ring when, and how to ring correctly and safely. You hold the bell by the leather handle, as close as possible to the bell, and ring it away from you with a similar action to knocking a nail into a plank of wood.

EXCEPT that if you have a small not-so-adept child, they stand a very good chance indeed of hitting themselves in the face as they bring the bell back up after “knocking in the nail”. The edge of the bell is quite sharp, and it’s mass and energy, even for a small bell, is considerable, so the injury you can inflict on your face will be substantial.

Here’s the mantra; “hold the bell up, like a cup of water. Tip forwards, to throw the water over the teacher, and bring it up again, without tipping the water back over yourself”. Small not-so-adept-children tend to prefer force to technique to try and make the bell sound, which is where we all get scared.

So I stood there, ringing my bells, and calling out “Fred’s turn, Joe’s turn, Fred-watch-your-bell-turn, both of you”. We got through all the verses without any bloodletting, I was glad to say. I think I will try and bring in some soft beaters for the smaller children to use next time. 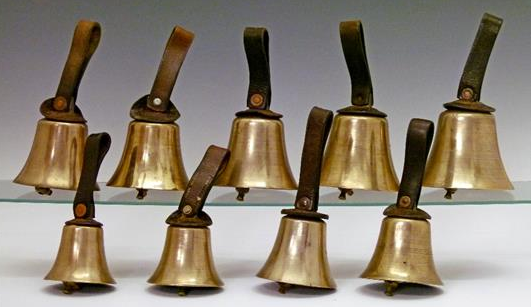 This entry was posted in Percussion and tagged handbells. Bookmark the permalink.