I’ve a couple of ukulele classes to teach this year. One group, of year 5 and 6 children, have already done ukulele as a class instrument a couple of years ago, so I didn’t want to just follow my tried and tested route.

So, in order to provide them with a completely new angle, I thought I would start by teaching them to read TAB.

We started the lesson by checking the tuning using the song “My Dog Has Fleas”, which they all remembered with affection from last time. That sorted out tuning, holding, plucking, and they were mostly quite quick to get this right.

I revised the parts of the ukulele, especially the frets, and the spaces in between where you put your fingers, and how these spaces were numbered 1-top space-finger-1; 2-second space-finger-2; 3-third-space-finger-3.

Then we strummed open strings while we sang “Concentration”. I handed out a sheet like this: 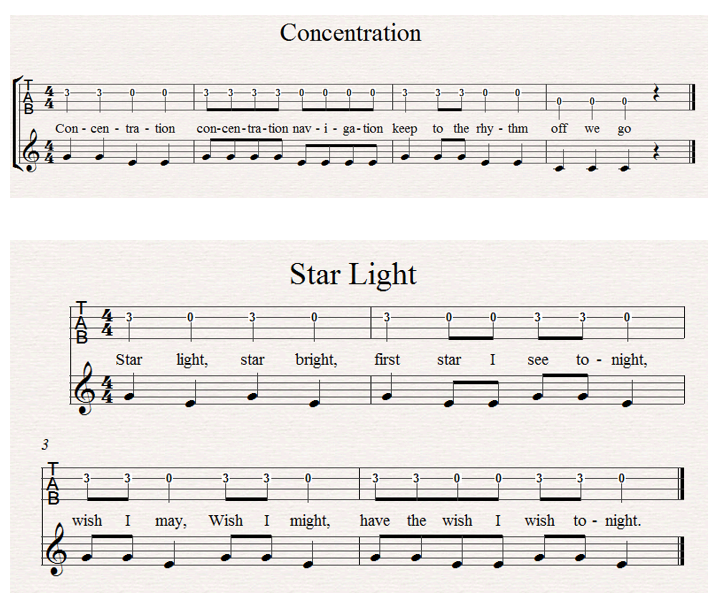 and explained that this had the MUSIC NOTATION and the TAB NOTATION, and it was TAB we were doing today. (At this point I came over all ferocious, and made sure that they were listening, as if they missed this explanation it would take forever to get them back on track!)

We all laid our ukuleles under the music for “Concentration”, with the pegs on the left and the body on the right. All of us. Every one. Then, I showed how the strings of the ukulele related to the four lines of the TAB, and how each line related to “My-the lowest line, Dog-the next one, Has – nearly the highest line, Fleas-the top line.”

I did my very best to show, explain and demonstrate how putting your third finger in space 3 on the “Has” string, and taking it off, as you pluck that string makes the tune for “Concentration” emerge from the ukulele. At the first go, one or two children got the idea. Once I was sure they knew what they were doing, I split us all up into groups lead by people who knew what to do. There was chaos for about five minutes, and then suddenly, nearly everyone caught on. It was a simple matter to sort out the two of three who still needed help, while the other children were given the challenge of playing the next tune on the sheet – another tune that they were already familiar with from previous years.

Within seconds, I was being besieged by excited children who had suddenly discovered that they could read and play TAB. Time was up, and the lesson ended on a high.

Now, HERE’S the missing step which I should have done next, except I hadn’t thought of it. In fact, I should have introduced this handout (there’s no whiteboard in the room where I teach) after we had revised “My Dog Has Fleas”;

If I had used this to explain how the TAB notation relates to the ukulele strings, I think I could have saved several children from teetering on the brink of saying “I don’t get it” or, even more to be dreaded “It’s too confusing”.

Roll on The Pink Panther! 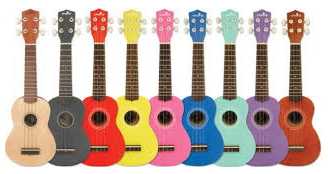 This entry was posted in Class Teaching, Lessons that have happened, The organised teacher, Ukulele and tagged TAB. Bookmark the permalink.