39/60 Preparing for the End of Term Nativity

I’ve set up the “teams” now for some of the carols at the end of term. The year 3 /4 class is responsible for playing the percussion I have put three of each different instrument in each carol; the

The “Little Donkey” team of six have to play an ostinato rhythm; “Little Don-key” on the woodblocks, and ring the jingly bells in the bit where it goes “Ring out those bells tonight”

The “Rocking” Team are accompanying “the Rocking Carol” (“Little Jesus Sweetly Sleep”) with triangles, playing a steady slow pulse throughout the two verses. 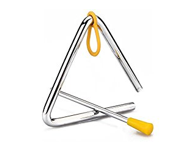 The “We Three Kings” team is much larger. Verse 1 will be accompanied by on ostinato “We Three Kings” tapped on tambourines. Verse 2, gold, will be accompanied by jingle-sticks. Verse 3, frankincense has shakers, and verse 4, myrrh, the more ominous sound of scrapers. The most hotly contested instrument was the suspended cymbal and soft stick for the chorus. No surprise there.

That is twenty-four of the twenty-nine children in the class each with a part to play.  Some of them were absent (ill) or absent (extra support with maths). I’ll add them in when they re-appear.

I’ve put the instruments for each carol team into separate tubs, with a note of what has to be played when. So far, so good. Unfortunately I forgot to make notes of Which Child is playing which part….

Next lesson may be interesting as some of the children won’t remember what they were meant to be doing, and others could try and take the opportunity to switch groups….

This entry was posted in Uncategorized. Bookmark the permalink.