I’m spending more and more time in lessons with beginners working on identifying ‘steps’ (seconds) and ‘skips’. Reading music becomes much quicker when you don’t go to the trouble of working out the letter name of each note, but merely plonk the relevant finger down.

In the early stages of piano you are just using what I call ‘five-finger-tunes’, and I am sure there is an equivalent for teachers of other instruments.

I’m currently teaching piano a young violinist and we started a little tune using DEFGA. I have been quite surprised to see that she has very little independence in the fingers of her right hand. Of course, string players use the whole of their right hand as a unit. That would explain it, except that she had also been learning keyboard for several years so I would have thought she would be used to using her right hand and to piano finger numbers. Hey ho. This was only lesson two with me on the piano, and so very early days for her to adjust to my teaching style.

After an unsuccessful and confused walk through the melody, I got out the little bricks;

I showed her the melody on the bricks, rather than the keys, comparing it to the sheet music; F    G A D     E, and so on, singing the tune using finger numbers as I went along ‘middle….. next finger, pinky, thumb….. pointy’). Then she had a go, avoiding the tricky business on dealing with the conversion from violin finger numbering to piano finger numbering and without any fear of ‘playing’ a wrong note.

Finally, she played it through on the piano much more successfully. Later on, a G sharp makes a brief appearance; 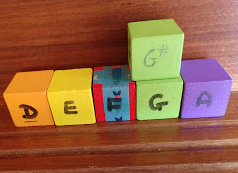 I quickly wrote on a spare green brick, so she could see how the fourth finger (‘piano finger’) climbs onto the black note; A G sharp; then I took it away for her to read and play A G F E D.

It is not often that I stumble upon such a versatile resource… fiddling round with the bricks enlivened several lessons yesterday.