I’ve always tended to say “shark”, rather than “sharp” when teaching piano – as in “watch out for Freddy Shark” when teaching G major scale. It seems to make it more memorable. 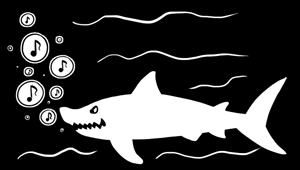 Start by covering the thumb hole at the back, (“LEFT hand on top, Miranda”, or whoever it is this time) and the top three holes, then, using fingers 1 2 3 of the RIGHT hand, cover the next three holes. This note “D”, the one we were threatening Darth Vader with last week.

DON’T PLAY THE NOTES YET! (I spend most of my class recorder lessons saying “take your recorders OUT of your mouths and DON’T play them!”)

NOW, lift the FIRST finger of your RIGHT hand – check ALL the children carefully, because some will have swapped their hands over, and some will have shifted their right hand fingers down, so that finger 1 is on the hole that properly belongs to finger 2, and finger 2 is occupying finger 3’s place, and finger 3 isn’t doing anything at all.

Now you are ready to teach, sing, and play the Shark Song.

This entry was posted in Recorders. Bookmark the permalink.